Twisted from the Sprue is my little corner of the internet. This site started as a simple web presence for the Three Rivers IPMS model club - as in middle-aged guys who never quite out-grew gluing together miniature cars and planes (and not a club of really good looking people who have their pictures taken for underwear ads and the like). The club now has a real web-site, and this blog is a place for me to post stuff I find interesting or just want to ramble on about.
Its reassuring to know you're not the only guy with an obsession for trivia - if you happen across something interesting here, or have a question or something to contribute, please leave a comment or drop me an email at dnschmtz@gmail.com
Don
___________________________________________

This post marks an aniversary of sorts. The first time I wrote one of these "Twisted From the Sprue" stories was in the summer of 2000. My IPMS chapter was trying to launch a monthly newsletter and I had a "column" under the" Twisted from the Sprue"  name. One of those first essays was about packing and relocating my modeling workbench as my family moved to a bigger house, a memory that came flooding back as my wife and I took the downsizing plunge this and moved once again.

Back in September I saw the 4K (digital) re-release of 2001: A Space Odyssey on the Carnegie Science Center's big screen (yeah, if you' look at the dates that was about 4 months ago - now you know how long it can take me to write these). The digital version was released at roughly the same time as a new 70mm film print produced under the supervision of Christopher Nolan, and there is a lot of discussion as to whether the digital "print" was made from the new Nolan print or the original negative and how accurate the colors in the digital version are - it seems that the two are unrelated and the 4K version has received good reviews for image quality and for its accuracy in reproducing the original theater images. It certainly looked really good to my untrained eye. The 4K print is now available on Blu-ray disk for a very reasonable (about $20) street price.


Warning: this article contains spoilers about the movie and book 2001: A Space Odyssey. If you've managed to never see the movie or read the book or hear them discussed in the last 50 years, you're probably not going to, but don't complain to me if I ruin the surprise...

A Car Modelers Guide to IPMS

It seems like the guys (and a few gals) who spend their time gluing bits of plastic together to make model cars should have a lot in common with the guys and gals who glue bits of plastic together to make model planes and tanks. But walk around the automotive tables at an IPMS show and you’ll almost certainly hear someone whispering something like “these IPMS guys just don’t know what they’re doing when it comes to cars”. Usually they say it a little more colorfully than that. And you hear it again at the end of the show when the whispering is a little louder and along the lines of “how did that ever win!”.

May your hands always be busy...

In the unlikely event you've been reading these articles from the beginning, you know that this blog was supposed to be about the hobby of scale modeling - building miniature cars and planes and such. In the first few installments I actually tried to find some tie-in between the hobby and whatever I wrote about, but it kept getting harder to do. If you want to talk about scale modeling, you really have to do scale modeling, and I found myself drifting away from the hobby. I still get to club meetings and buy the occasional kit, but I'm spending less and less time at the workbench and actually finishing a model has become largely hypothetical. From the people I've met at IPMS club meetings and model shows, that is not an uncommon thing. Which made me a little curious about why.

I thought I knew all there was to know about the GT40 - Ford's legendary race car from the 1960s. And then I saw a picture on Facebook of a GT40 at the Holman&Moody shop sometime between 1988 and 1990, taken by Russ Haines when he worked at H&M. Russ had asked if anyone knew anything about where this car was now. I thought this was going to be easy, but I would learn a lot more about the GT40 then I imagined before I figured it out. Not that I discovered something no one else had known, but this was a pretty obscure piece of GT40 history and putting it all together was kind of fun.

Many thanks to Russ Haines for letting me use his photos!

In part 1 we ended with Grady Davis teaming up with John Wyer in late 1966, leading to the formation of JW Automotive Engineering (JWA) in England and the first official Gulf Racing team making its debut in 1967.  Lets pick up the story there...

When Andrew Carnegie sold the Carnegie Steel company in 1901 to create US Steel, he became - at least by some measures - the richest private person then or since. But Carnegie had accomplished something even more impressive: Carnegie Steel had attracted and nurtured a technology base in the Pittsburgh region that would be unmatched until the rise of Silicon Valley nearly a century later. The Mellon and Pittsburgh National banks had grown rich financing the fledgling steel industry, and would continue to invest in Pittsburgh's entrepreneurs and engineers to develop the modern electrical power industry (Westinghouse), the aluminum industry (Alcoa), processed food (Heinz),  and heavy manufacturing (Blaw-Knox, American Bridge and others).

At the same time that Andrew Carnegie had been building Carnegie Steel, John D. Rockefeller was building the Standard Oil empire. While the automobile had not yet been invented, neither had the the electric light bulb or commercial electricity generation; petroleum products were in demand for lighting, heating and increasingly for commercial lubrication. In 1900 a number of Pittsburgh businessmen lead by William Mellon decided to get into the growing petroleum industry, and it wasn't their style to make a small investment in someone else's company; instead they got together and built a refinery near the newly discovered oil fields in Texas, followed by a number of pipelines, service stations, a fleet of oil tankers and other bits of infrastructure to support the rapidly growing automobile industry. A few years later, these investments were consolidated as the Gulf Oil company, which would soon grow to rival giant Standard Oil.

Born  in 1908, in a really small town in Texas not too far from Austin and the East Texas oil fields, Irion Grady Davis (you sometimes see him use his first initial, but mostly he just went by "Grady") had studied geology at Texas University, followed by a few years of polishing at Harvard. Fresh out of school, he went to work for Gulf Oil, spending 20 years in their Venezuelan operation. He apparently knew how to work with foreign governments to get things done, and in the mid 1950s was promoted to Administrative Vice President of Gulf Oil and transferred to Gulf's headquarters in Pittsburgh.  A few years later he was promoted to Executive Vice President - the number 2 spot in the company. He would play a big part negotiating with the Kuwaiti government for access to cheap middle eastern oil, which would allow Gulf to expand into Europe.

Image shamelessly stolen from the Corvette Hall of Fame website, lots of good stuff there. 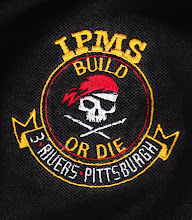 TRICON 2022 - April 2nd
Once again Three Rivers IPMS will put on TRICON - our one day model show. Pack up your models and head out to the Beattie Career Center in the northern Pittsburgh 'burbs for a day with your fellow styrene addicts. Get full details on the club web page: tricon.tripms.org